Who do you thank? 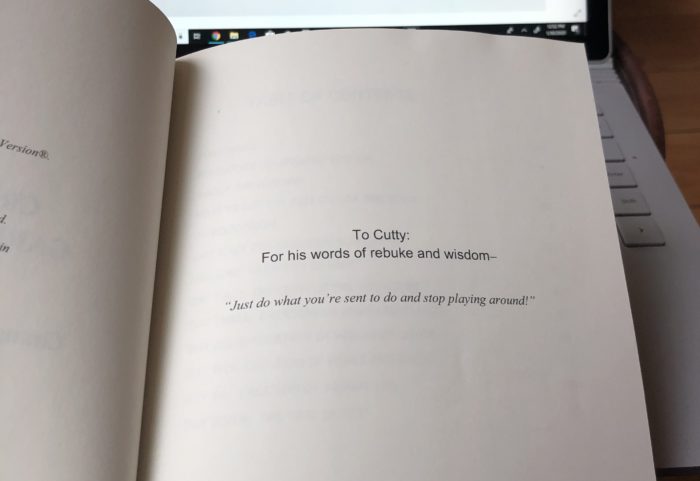 My book was dedicated to one of my mentors, Cutty Joseph.

Cutty died several years ago when he was 84. I always think of him and his words of advice to me throughout the years. He was always saying I should do what I felt God had sent me to the earth to do. And this is why I dedicated the book to him. It was the outcome of his pointed advice.

Cutty had read the first draft and gave me very useful feedback. He was the one who cautioned me that there should be some reference to godly values. Readers should not just go out and create whatever they fancied; they had to be guided by what God would assess as “good” and “very good.” He was right and I modified the manuscript after his comments.

I did not disclose I was dedicating the book to him and so, when it was printed, I presented him with a copy.

He was in his late 70s at that point, and he chuckled and smiled in surprise when he saw his name on the dedication page. He could not believe I had dedicated it to him and he also could not recall that particular piece of advice.
“Did I really say this?” he asked?
“Yes, you did.” I responded. “And you also said ‘stop playing the ass’ but I did not think that was appropriate to include in a Christian book.”

We both had a good laugh that day for that was exactly how he spoke to me.

Cutty was a former politician, Minister of Government, international relations scholar, educator and ambassador. We met as we worked together on a revised vision document for the political party we both supported. He said I was too aggressive in my deadline of the document. He was prepared to take his time. I wanted it all completed in the shortest possible time. This was likely due to our 40-year age difference. His seniority and experience had caused him to be a bit cynical about the purpose and usefulness of the document. I was determined we could make a difference and we had to get cracking now. He was eventually right; and did not hesitate to remind of this when we saw the final destination of the document.

But Cutty pushed me to move forward; up and out of the island nation of Trinidad and Tobago where I was at the time. He reminded me that I was a Harvard law graduate and I could do anything. He encouraged me as a woman and an entrepreneur to carve out my own pathway. He said women in power were on the rise. He told me I could go to Geneva, to Shanghai, to New York, to London. He said the world was my oyster.

I ignored him for most of our early conversations.

But then I returned to his words of advice. When I was making a proposal for a bold career move, I consulted with him. And for this he was encouraging. He gave me his vocal and written support and made a personal recommendation to the decision maker, the Prime Minister at the time.

I think of Cutty ever so often when I am hesitant to make a bold move, when I begin to doubt and question my decisions or when I wonder what could have been.

However, his words are still true. While I can still breathe, my agenda remains the same; just do what I was sent to do. Because, although many years have passed, I still have a lot of value to add in many fields and indeed, the world is still my oyster.